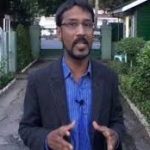 KARACHI: A reporter of a news channel, Ali Imran Syed, who went missing from an area near his home in Gulistan-i-Jauhar on Friday after reporting details along with CCTV footage of a raid by law enforcement agencies on a hotel for the arrest of an opposition party leader, reached back home safely on Saturday evening, according to his family and colleagues.

The Geo News reporter’s disappearance drew widespread criticism from the community of journalists and political parties as the Pakistan Federal Union of Journalists (PFUJ) gave a call for a countrywide protest against it and demanded his immediate ‘recovery’.

His elder brother, Syed Talib Abbas Rizvi, who had lodged a complaint at the Sachal police station about his ‘kidnapping’, confirmed to Dawn that Ali Imran had reached safely at their mother’s home in the Malir area. However, he did not give further details. In the FIR he had lodged under Section 365 (kidnapping or abducting with intent secretly and wrongfully to confine person) and 34 (common intention) of Pakistan Penal Code, Mr. Rizvi had stated that his younger brother had been “kidnapped” by unknown persons for some unknown reasons.

According to the complaint, the journalist had left his home in Block-8-A of Gulistan-i-Jauhar on Friday between 7pm and 8pm to buy biscuits from a nearby bakery when he went missing. When he did not return till 10pm, his wife contacted her brother-in-law, expressing fears that he might have been made to disappear deliberately. The news went viral on social media and was also aired by TV channels late on Friday night.

Taking notice of the case, Chief Minister Syed Murad Ali Shah called an urgent meeting in which he asked police to find him immediately, observing that such incidents were against freedom of expression and drew attention of international media and human rights organizations. Besides the chief secretary and police chief, the DG Rangers and representatives of different agencies attended the meeting.

In a tweet, federal Minister for Information Senator Shibli Faraz earlier said the relevant federal departments had been directed to cooperate with the Sindh government, asserting that journalists’ protection was the government’s responsibility. He also asked the Sindh government and Sindh police to utilize all their resources to recover the reporter.

PPP chairman Bilawal Bhutto-Zardari, federal ministers and the leadership of almost all political parties also expressed their concerns over the journalist’s disappearance.

Acting Karachi police Chief Arif Hanif along with SSP Anti-Violent Crime Cell later visited the residence of the Geo reporter and assured his family that all possible resources would be utilized for his safe recovery.

He informed the family that the case of disappearance of the journalist had been registered against unidentified persons. The acting police chief also visited the place from where the reporter had reportedly been whisked away, according to a police spokesperson.

Geo News’ bureau chief for Karachi Fahim Siddiqi, Karachi Press Club president Imtiaz Khan Faran and others said Ali Imran was a non-controversial reporter. His last report before his disappearance was about the arrest of retired Capt Muhammad Safdar from the hotel whose CCTV footage was aired by the channel. Mr Siddiqi told the media there was ‘pressure’ on the private channel after airing the footage of the raid and arrest.

Separately, journalists in Karachi on a call of the PFUJ for a countrywide protest staged a demonstration outside the Karachi Press Club, expressing concern over Ali’s disappearance. In a statement, PFUJ President Shahzada Zulfiqar and Secretary General Nasir Zaidi urged the government and police to take steps for the reporter’s safe recovery and arrest of the suspects.

The PFUJ said it was alarming that the journalist community was being targeted and the number of disappearance cases were on the rise, which was proof of the diminishing system of policing in the country. “We want immediate release of Ali Imran apart from the protection and security of the journalist community,” the statement added.

The National Press Club and the Rawalpindi-Islamabad Union of Journalists also expressed concern over the matter and termed it a failure of the government and relevant institutions to protect the citizens. Federal Minister for Human Rights Shireen Mazari in a tweet said that no one should go missing in a democracy.

Earlier in July, senior journalist Matiullah Jan was briefly ‘detained’ in Islamabad, while a Karachi-based journalist, Bilal Farooqi, was arrested in September for allegedly “spreading hatred” on social media.

In Islamabad, on special instructions of Prime Minister Imran Khan a joint fact-finding committee was constituted by the Ministry of Interior, according to a press release.

It said the prime minister had taken serious notice of the journalist’s disappearance.

The committee will be headed by Federal Investigation Agency’s Additional Director General Ehsan Sadiq and its members will include the additional IG, Special Branch, Sindh, the joint director general of Intelligence Bureau, Sindh, and the DIG East, Sindh Police, Karachi. The committee will ensure close coordination between federal and provincial governments to ascertain facts behind the incident and furnish its findings.