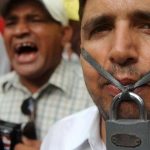 ISLAMABAD: The Pakistan Bar Council (PBC) — mother institution that regulates the affairs of the legal fraternity — on Saturday included more lawyers in the “Journalistic Defence Committee” it has constituted to provide legal assistance to and defend journalists.

Through a notification the PBC further said that 12 lawyers in addition to seven lawyers had already been nominated for the committee on Sept 29.

Talking to Dawn, PBC vice chairman Abid Saqi explained that names had been added in the committee to give a gender balance since eight female lawyers had also been included in the list.

Advocate Mohammad Usman Warriach was appointed coordinator of the committee because without a coordinator it would have been difficult to manage such a body, he said.

Saqi talks about ‘shrinking’ space for right to express

The fresh inclusion was made in the committee in view of the response of the legal fraternity as well as the journalist community. The names are Ghulam Mustafa Kamal Shah, Mohammad Aftab Alam, Rai Azhar Iqbal, Sikander Naeem Qazi, Ramshah Kamran, Zinab Samantash, Miss Imaan Mazari, Saira Waqas, Maimana Khattak, Zainab Janjua, Ayesha Siddique Khan and Saadia Noreen Malik. The idea behind forming the committee is to check the alleged policies of the government that undermine freedom of expression through a draconian cybercrime law, particularly making it increasingly difficult for journalists to discharge and perform their journalistic duties independently. There is an increasing perception that the space for dissent and the right to express critical views in the country is fast shrinking, he said.

The decision to appoint the committee was taken by Abid Saqi for providing legal assistance and services to journalists and their elected bodies in the court of law in Islamabad/Rawalpindi for protecting their right of expression.