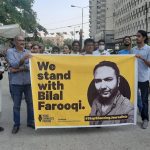 KARACHI: A judicial magistrate on Saturday ordered the police to file a challan in a case against journalist Bilal Farooqi.

Farooqi, a news editor at The Express Tribune, was detained in relation to an FIR registered against him two days ago. According to the FIR, he was booked under Section 505 of the Pakistan Penal Code and Section 196 of the Criminal Procedure Code.

During Saturday’s hearing, the investigation officer (IO) submitted a police report in the court of judicial magistrate Uzair Ali Khan, saying that Sections 500 and 505 were added in the FIR by mistake.

However, Sections 11 and 20 of Prevention of Electronic Crime Act 2016 remained, with the court informed that the FIA was the competent authority as the sections related to the country’s cybercrime laws.

The judge asked the IO to file a Class-C challan. As the police stated that no evidence was available against the journalist, the judge inquired if they thought they could “arrest anyone over anything?”

The IO will now have to submit the challan within the next 14 days.

Farooqi was represented by his lawyers, Jibran Nasir and Advocate Ghulam Shabir Buledi, while scores of journalists were present outside the court in solidarity.

Farooqi was released in the wee hours of Saturday, hours after he was picked up by the police from outside his home in Karachi. His friends and colleagues said he was freed on the ‘personal bail’ of his lawyer.

A Sindh Law Department spokesperson told The Express Tribune that the FIR would be investigated.

Later in the day, a protest was staged outside Karachi Press Club (KPC) seeking “justice” for Farooqi.

Protesters shouted slogans for freedom of expression and freedom of press in the country, insisting that media persons should not be treated as criminals.

The protesters said several cases of a similar nature have recently been reported in different cities.

“Such arrests and fake FIRs failed to suppress the voice of journalists in the past,” said a journalist participating in the protest, adding that such attempts could not muzzle their voices.

Newspaper: The Express Tribune, The News