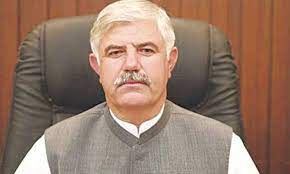 The amount is paid by the provincial government to PPC as a special grant announced by the chief minister during oath taking ceremony of the PPC body.

During the meeting, the chief minister also agreed over holding of a meeting to take a review of progress being made on setting up of Media Enclave and issues pertaining to Peshawar Press Club.

The chief minister said he is well aware about the problems being faced by journalist community and taking practical measures for its resolution.

He said media is fourth pillar of state which creates awareness in public about their basic rights.

The government, he added, not only welcomes constructive criticism from media but also takes guidance from it.

He said in KP government and media have exemplary liaison for attainment of public rights and for protection of province’s rights.

Speaking on the occasion, PPC President M. Riaz congratulated the CM for presenting historic budget for the upcoming fiscal year.

He also thanked Mahmood Khan for taking personal interest for the welfare of journalist community and for resolution of problems being faced by them.