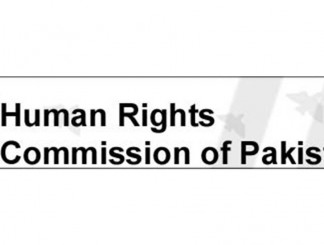 ISLAMABAD – The Human Rights Commission of Pakistan (HRCP)’s annual report on the state of human rights in 2020 notes with concern that the government’s initial response to the Covid-19 pandemic was marred by a lack of transparency and enforcement.

The report was launched here in a press conference organized by the HRCP officials.

The report said that no strict lockdown was imposed when it should have been, hospitals were ill equipped to handle the influx of cases, and non-compliance with standard operating procedures in mosques was not addressed.

The report said that however, cash distributions under the federal government’s Ehsaas Programmed were a welcome reprieve for those in need of a social safety net.

The report also added that presidential ordinances were repeatedly issued as the government continued to bypass the correct constitutional procedure of presenting a draft bill in Parliament and holding detailed discussions of the draft.

On a welcome note, the National Assembly passed significant human rights-related laws, such as the Zainab Alert, Response and Recovery Act and the ICT Rights of Persons with Disability Act. The Ministry of Human Rights also submitted several recommendations for prison reform in its report to the Prime Minister.

HRCP report noted that the right to freedom of expression and assembly remained under threat as spaces for dissent continued to shrink in 2020. This was evident in the government’s attempt to impose new curbs on the electronic, print and social media.

Journalists and media professionals, in particular, found themselves under continued pressure. The Aurat March also faced rigid opposition and harassment from various quarters, with Islamabad participants becoming a target of violence during their rally.

It added that worryingly, crimes against vulnerable groups such as children, women and religious minorities continued unabated. The Commission of Inquiry on Enforced Disappearances also came under fire in a scathing review from the International Commission of Jurists, which criticized the commission’s failure to hold perpetrators accountable.

The report said that at least 2,960 cases of child abuse were documented across the country, according to one estimate, although the number is likely higher.

It said that the ages of children abused were particularly disturbing—infants as young as a year old were not spared—and the crimes particularly heinous, ranging from abduction and rape to gang-rape and murder.

It also said a family in Rawalpindi who beat their eight-year-old maid Zohra Shah to death after she released some caged parrots, sparked an outcry in June.

It also mentioned that in an especially gruesome case in Baluchistan, the body of an eight-year-old boy was found hanging from a tree in Killa Abdullah. The post-mortem report confirmed that he had been sexually assaulted by two people.

On education sector the HRCP report said that in general, online classes—made necessary by the Covid-19 pandemic—benefited only those fortunate enough to have digital access, with others left to fend for themselves.

It added that education observers expressed concerns that the disruption to learning caused by lockdowns would increase the proportion of children out of school.

The report said that university students across the country protested against hikes in tuition fees and demanded fee waivers, with the police using force to dispel many such demonstrations.