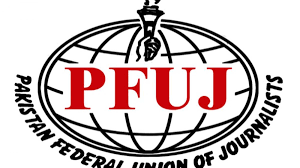 ISLAMABAD: Pakistan Federal Union of Journalists (PFUJ) has demanded immediate appointment of the judge of Implementation Tribunal for Newspapers Employees (ITNE), which is being delayed due to the reasons best known to the Ministry of Information and Broadcasting.

Pakistan Federal Union of Journalists President Shahzada Zulfiqar and Secretary General Nasir Zaidi, in a joint statement, said that for the last six months, the ITNE is without any judge, which had resulted in pendency of hundreds of cases, filed by journalists as it is the only forum available for the redress of grievances of journalists and media workers against newspapers management and owners. “This is a highly alarming situation that despite Islamabad High Court directions, the judge of ITNE is not being appointed and the court directions are being ignored,” they said. They said that due to unavailability of judges of ITNE, journalists and the media workers were facing hardships and financial constraints. Therefore “further delay will be a criminal negligence on the part of the authorities”, they added. They also demanded appointment of ITNE judges in every provincial capital, Karachi, Lahore, Quetta, Peshawar, apart from the federal capital to provide swift justice to journalists and the media workers.