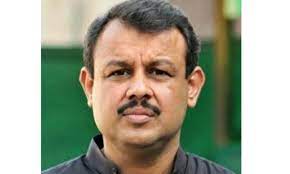 LAHORE: The Kahna police have arrested TV anchor Asad Kharal on charges of an armed attack on a police officer, holding him and a constable hostage and snatching their official weapons.

Kharal, however, denies the allegations.

The police lodged the first information report (FIR) against Kharal under multiple serious charges and picked him up from his Valencia Town residence with the support of police commandos on Tuesday night. The suspect is now on a four-day physical remand granted by a local court.

The issue surfaced when the journalist allegedly hurled abuses at police guards provided to him and his family on a court order in 2017.

The FIR, lodged on the complaint of police head constable Ashfaq Ahmad, said the anchorperson attacked the police officials, held them hostage in his house, snatched official weapons, opened fire on them and injuring a constable.

The police also included Section 392 of the Pakistan Penal Code that showed the suspect committed the offence of robbery as well.

Quoting the incident, police official Ashfaq Ahmad alleged that he along with constable Idrees was discharging official duty at the Valencia residence of Mr Kharal.

He said the journalist started hurling abuses at constable Idrees, assaulted him physically and tore his uniform. He said when he tried to intervene, the suspect threatened him with dire consequences.

On being informed, Kahna circle assistant superintendent of police (ASP) Mohammad Shoaib reached the site along with armed personnel. He said Mr Kharal took the ASP inside his residence and showed his distrust on the police guard.

“Suddenly, the suspect snatched from me my official rifle and pointed it at me and the ASP,” the FIR quoted the complainant as saying.

The anchorperson locked the room from inside, took them hostage and opened straight fire on him and the ASP, the constable said.

“We immediately laid down to save our lives. Soon we managed to unlock the door and rushed outside. The suspect chased us and resorted to fire outside his residence,” the complainant said.

According to the other side version, the anchorperson had showed his distrust on the police constables deputed outside his residence for his security.

He had complained to the Lahore CCPO through a voice message saying he was feeling himself insecure for the last few days due to suspected movement of some unknown persons outside his residence.

In his complaint to the CCPO, Asad Kharal said that the police constables deployed for his security were not properly discharging their duties.

As the incident came to the spotlight on Wednesday, Asad Kharal denied allegations leveled against him by the police.

According to some witnesses and mobile phone footage of the incident, a heavy contingent of police raided Kharal’s house and arrested him.

He said the police had deputed a squad of constables for the security of Asad Kharal on the court orders in 2017.

For the last three days or so, he said, the suspect was misbehaving with the security staff on petty issues and on last Tuesday, he lost his temper.

“A a few days before the incident, the constables deputed for the security of the anchorperson had brought the matter to the notice of senior police authorities about his insulting behavior but we ignored them”, the DIG said.

He said the act of opening straight fire on the ASP and police constable on duty was intolerable.